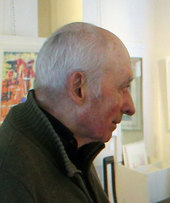 Walter Sawron, born in East Germany at the end of WWII, was at a young age, influenced by an exhibition of the art of Pieter Breughel and of Andrew Wyeth at a museum in Brussels. Later, an exhibition from the Belgian Congo made an extreme impression on him while a student at a Jesuit Monastery School. In 1953, his family emigrated to Canada. Upon graduation from OCA and Teacher’s College, Walter obtained his Master of Science in art education at the Pratt Institute in Brooklyn, NY. His career in teaching took him to elementary schools, and to Napanee and District Secondary School, Loyalist College in Belleville and OCA, Guelph University and U of T.
After teaching, Walter turned to his farm at Plover Flats, the Calamus Farm, situated north of Newburgh and a rich career in the visual arts.